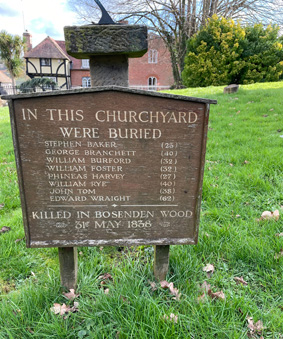 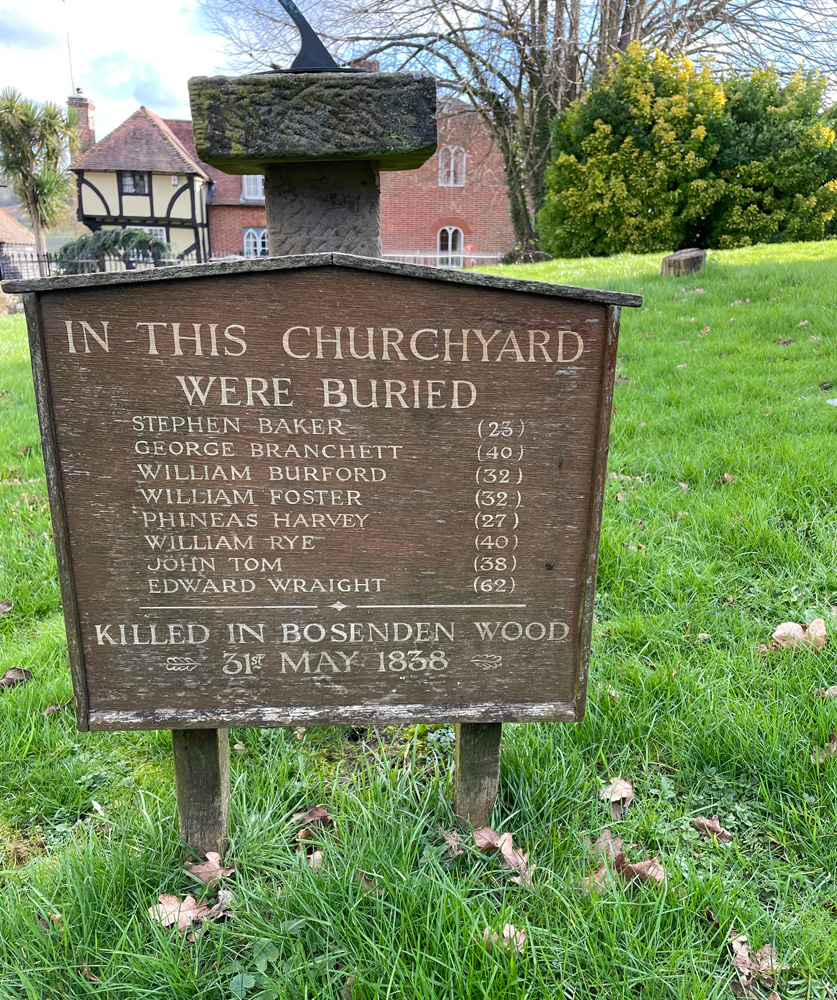 The churchyard at St. Michael’s contains a simple wooden memorial to the men from Hernhill who lost their lives in the tragic ‘battle’ of Bosenden Wood on 31st May 1838. The story of how John Tom who was the son of a Cornish publican and had severe mental health problems, persuaded nearly forty men from Hernhill, Boughton and Dunkirk to join him in a doomed insurrection, is well-known. This article looks at rural Kent in the 1830s and what lead the men whose names appear on that wooden memorial to sacrifice their lives in such a hopeless venture.

Save for a few, Hernhill in the 1830’s was not a happy place to live and raise a family. The end of the Napoleonic wars in 1815 had depressed England’s economy and for those who farmed or worked the land in East Kent, the hardship they suffered had been made worse by changes to the way relief to the poor was provided. It is difficult now to understand the reality of a life lived where 60% of your wages went on one basic commodity, flour; where there were no wages when work had to stop because of winter, bad weather or illness; and where you had to support on average over 4 children too young to earn any income themselves. Poor relief records give a hint of what that life was like. When a typical wage for an agricultural worker was 13s a week, boots cost 5s, a coat 10s, a blanket 4s and a spade 4s.

It is no surprise, therefore, to learn that during the winter months the majority of the male labouring population in Hernhill relied on poor relief, as did many small farms. The extent of this dependency was such that it was considered normal for everyone except the very rich or the very fortunate. Before 1834 poor relief provided a wide-ranging system of social welfare. This could be in the form of direct payments at a level comparable with agricultural wages, or work relief such as being employed to repair public roads. Payments were on a sliding scale with more being paid to those in greater need. But in 1834 new poor law provisions were introduced. The guiding spirit of these provisions was that poverty should be punished as an encouragement to work. Most of those seeking relief were sent to the workhouse, where women and men were separated, and occupants were treated like prisoners. Relief payments were awarded not only on the basis of need but also according to the claimant’s character and conduct. In any event, payments were capped at 5s a week and usually refused if the claimant was considered able-bodied.

The winter of 1837 was particularly harsh. Workhouses were full and hundreds of workers had to be given relief payments. It is estimated that about one in eight of the population of Hernhill and its surrounding villages were receiving relief payments or were in the workhouse. Many more were employed in relief work on local farms, though it has been suggested this work was primarily offered to avoid an increase in the poor rates which farm owners were required to pay. The guardians responsible for administering the poor relief system in the Faversham area were forced to write to London to justify the number of relief payments they were making to able-bodied men: “There is scarcely a Parish in [our area] but the labourers in which have suffered exceedingly, having been prevented from working in consequence of the Frost and Fall of Snow”. The guardians explained that there was a prejudice in the minds of many against entering the workhouse, but many had been compelled to accept it from “utter destitution” and others will follow unless temporary relief payments can be made.

Of the men commemorated on the memorial in St. Michael’s churchyard, Edward Wraight was the eldest at 62. He was a small farmer owning 20 acres and renting 30 acres more. He was the father of eleven children, though only six were alive at the time of this death. Two of his sons joined the insurrection with him and two of his daughters were married to other insurrectionists. He had recently been convicted of being in possession of stolen goods. Many of the insurrectionists had convictions for offences associated with poverty, such as theft of wood, poaching or other petty theft.

The youngest man commemorated is Stephen Baker at 23. He was a married labourer with no children. This was slightly unusual as 54% of women married in Hernhill at the time were pregnant at the time of their marriage. He was described at the enquiry into the insurrection as ‘an inoffensive young man’ and was probably supporting his parents. Both parents were admitted into the local workhouse shortly after his death.

William Rye was a fairly typical agricultural labourer. A married man and a father of seven children, four of whom survived him. His wife was described at the enquiry as a sickly woman. He is recorded as having regularly received poor relief during the 1820s and 1830s, including help with his rent. Like 70% of the insurrectionists, his rent was at the lowest level of the time; between £1 and £5 per year.

Not all who died were sympathetic characters. William Burford had been arrested for beating his wife in 1836. At the time of the insurrection he was unemployed and was described at the enquiry as “a decidedly bad character, concerned in several depredations that had been committed”.   His wife Emma seems to have been loyal to him though, as shortly before the ‘battle’ she tried to persuade him to leave and go home with her. Not only was she unsuccessful, but she was herself arrested for being involved in the insurrection.

The brutality of the new poor law can be seen in the history of George Branchett. In 1837 he and his wife Sarah were both ill and applied for relief. They were awarded 6s a week to support their six children. Sarah died in November that year and George had to apply for further relief to pay her funeral expenses. A few days after the funeral George and his children went into the workhouse. The children were placed in a different workhouse from their father. Poor relief records show that by the end of April the following year George had left the workhouse, but his four youngest children had died by then; two in the workhouse and two shortly after they left. George had to apply for poor relief to pay for his children’s coffins.

William Foster was another who had relied on poor relief in the 1820s. At the time of his death he had 5 children all under twelve. He, like Phineas Harvey, regularly attended services as St Michael’s, as did Stephen Baker and William Rye. The funeral of those who died must have been a very sad occasion. 60% of those who joined the uprising came from Hernhill. Phineas’ father, who had also participated, was reported as weeping as he carried his son’s coffin into the church. It was a tragedy for the whole community of Hernhill. Even the vicar, Rev Handley, was reported as being in tears as he read the funeral service. The Times reported that at the funeral the choir was very small as the bulk of the church’s choir had either been killed or were in Maidstone gaol for participating in the insurrection.

John Tom is himself buried in the churchyard. It is easy to regard him as the cause of so much death and misery, but probably he just provided an outlet for the resentment which the insurrectionists felt at their harsh treatment by those with wealth and power. Perhaps some blame lies with the Home Secretary of the time who released Tom from the asylum at Barming Health into the custody of Tom’s father, even though Tom was still of ‘unsound mind’ and insisting he was Sir William Courtney, King of Jerusalem. By the time of the insurrection Tom was also claiming to be the ‘true Messiah, King of the Jews’. Was he believed by his followers? Certainly by some, but probably the true motives of most can best be understood from their standard; a loaf of bread stuck on top of a pole.

None of the graves are marked. In the case of John Tom, this was partly to deter souvenir hunters and partly to prevent his corpse from being dug up by those of his followers who believed he was the ‘true Messiah’. The others are buried with their families. It would have been unusual for a labourer’s grave to be marked. Headstones could only be afforded by the more affluent classes. The families of Burford, Foster, Rye and Baker could not even afford their coffins. These were provided by the Faversham Poor Law Union.