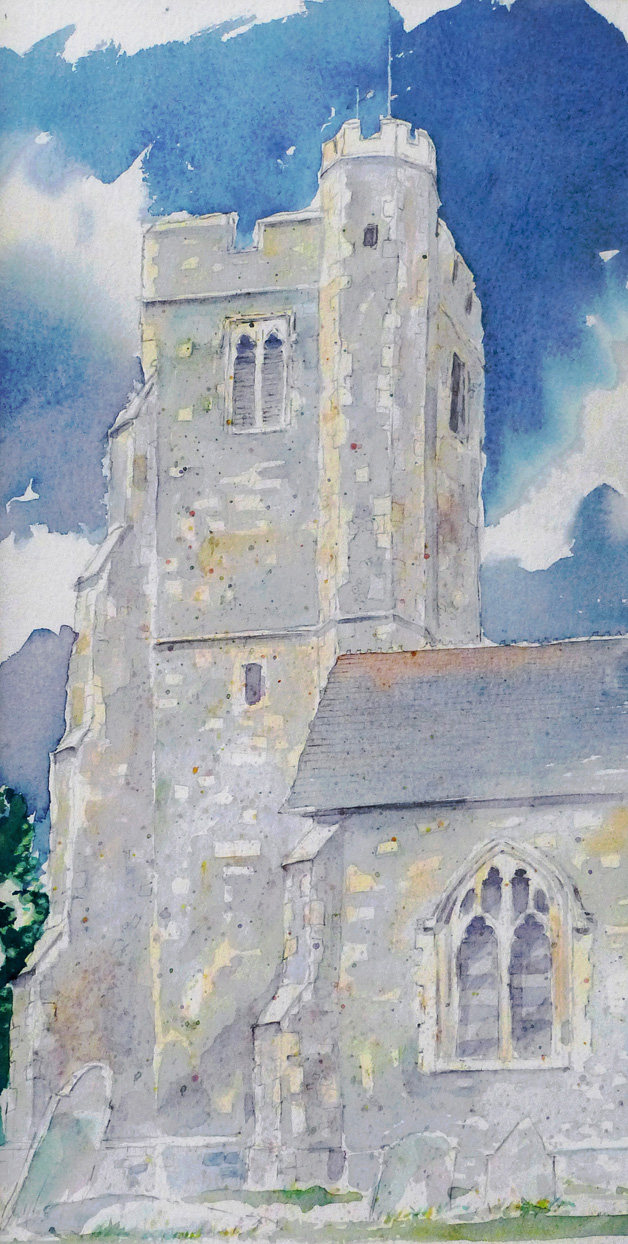 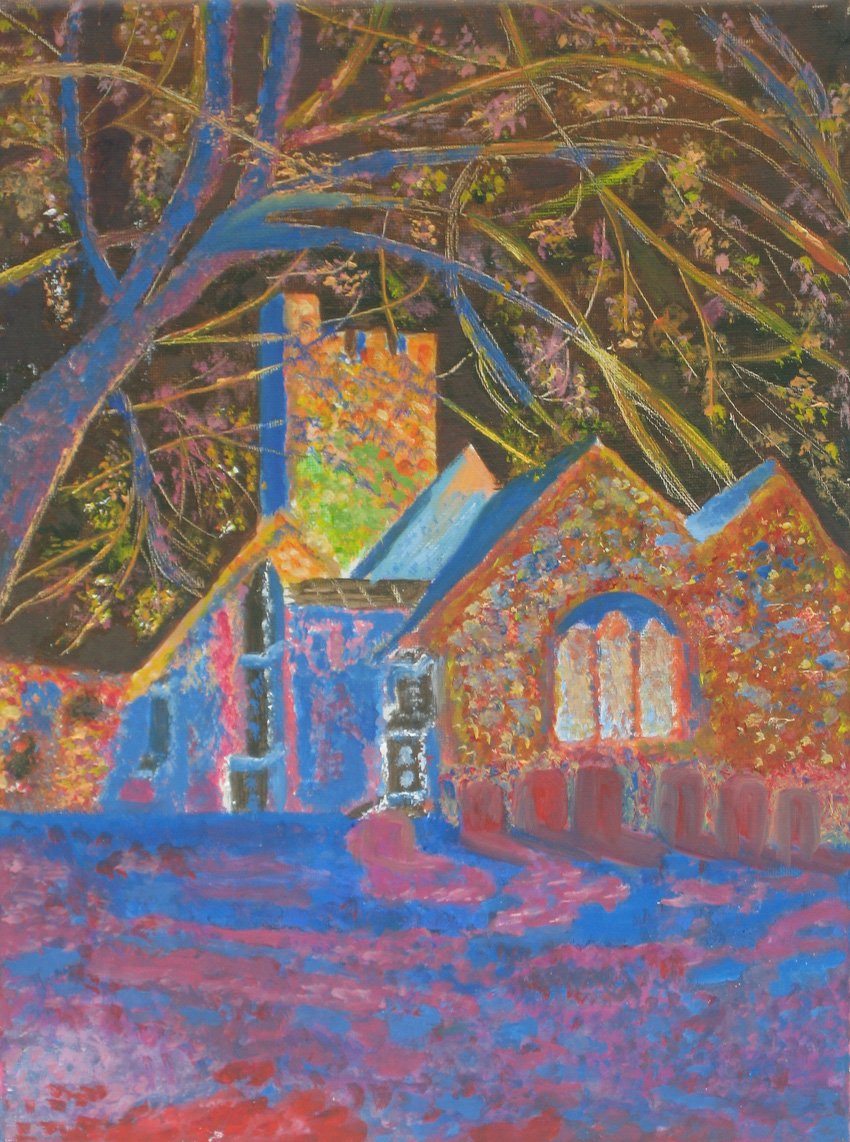 During 2003/2004, I embarked on a GCE A Level Course in Fine Art and during the progress of this course wrote an extended essay on ‘Ruins in Art.’   Some years later, I was a member of the Hernhill PCC Restoration Sub-Committee and we were considering ideas for raising money. I knew that several people in the village enjoyed painting and so the idea of producing a Hernhill Artist Calendar evolved with the first edition published in 2010. Further editions every two years ending with the 2020 edition, costs of production did not match sales figures. Paintings of St. Michael’s church appeared in several editions of the calendar including one of my paintings on the front cover of the 2020 Calendar. (Figure 1 above)

One of the most significant and fascinating features of the works I studied for the A Level essay was the range of techniques artists have used to portray or represent images of decay and age in buildings. In addition, the settings in which these buildings stand, or stood, seemed of equal fascination to the artists. It was through the A Level work that my interest in painting old buildings emerged, my final piece of work for the A level was an acrylic painting of Reculver Towers.

I do not wish to imply that churches in general are examples of ‘Time’s Shipwrecks’ or ‘Dust in the Air Suspended.’ All buildings, it could be argued, have a history dating from the time a particular building is completed. I cannot claim a vast experience of painting churches only producing to date two oil paintings of St. Michael’s, Hernhill (2011 & 2014).

What follows are some of my thoughts and observations about paintings of churches because I think such buildings inspire particular techniques and approaches to the subject.

Figure 1 is an exercise in complementary colours (the colour wheel); for example, where there is green in the photograph, I painted red, yellow in the photograph became violet, warm blue. It was important to retain an accurate perspective of the building but the major technique was to concentrate on the colour mix. There is little more to be said about this painting, you either like it or not, it does not claim to enhance any historical perspective or bring out any particular features of the church. 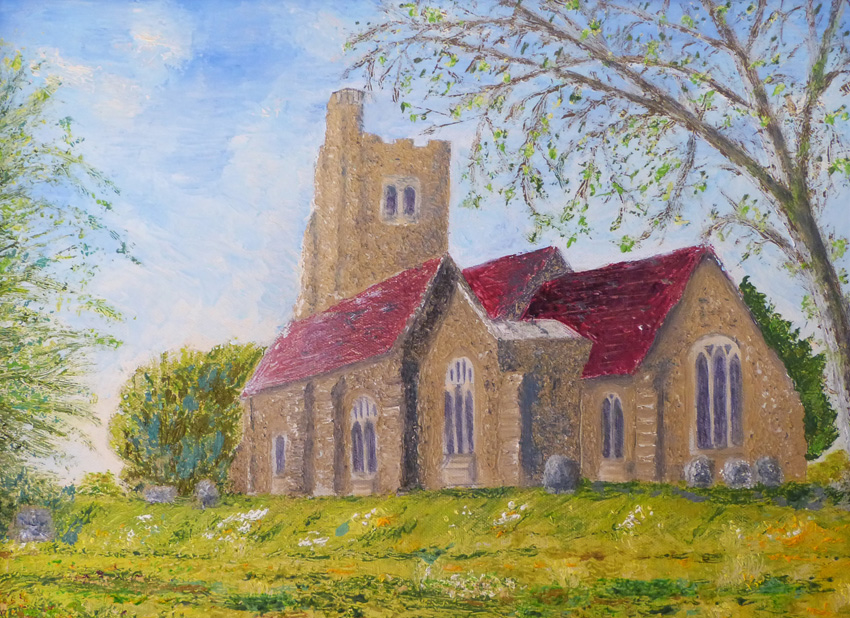 Figure 2 is also the result of a particular technique, the use of a palette knife with oils. This technique was chosen because of the wall/stone surface of the building. Perspective was tricky and this applies to the drawing problems of building in general. The weakness, on reflection, is a lack of definition as far as the direction of light is concerned. It is just possible to believe the light is coming towards the left of the building, the contrast with other parts with slightly less light is not as defining as it might be. One of the most distinctive features of the work by JMW Turner is his perception of how light directs the course of the painting. C.G.E Blunt’s work ‘JMW Turner – the Poet of Light and Colour’ is a particularly good celebration of Turner’s techniques.

Figure 3 is a delightful watercolour painting by local Kent Artist Ted Battersea. Ted allowed me to use this painting on the front cover of our 2016 Hernhill Artists Calendar. Ted seems to use the lovely sunny day to good effect with the light bringing out the texture and various tonal values of the stone. I think it is a good example of keen observation and a real appreciation that light has on every aspect of the tower.

The choice of a portrait composition is dictated by the tower and its setting and, in addition, the sky has an important compositional influence. 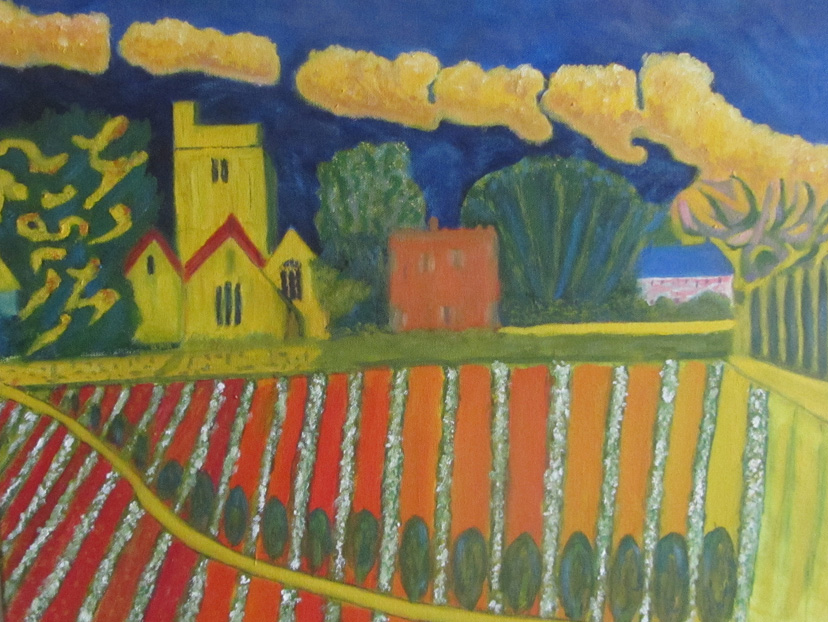 I have always had a fascination for the work of Kandinski and I have used features of his technique in this study of Hernhill Village. I doubt it would be appropriate for any painting of Hernhill without St. Michael’s Church. Figure 4 is a view from my house that has always been magical because it so easily reflects all the seasons, Spring with its green leaves and the fruit blossom, Summer sunsets almost behind the church and of course the colours of Autumn and the snow of Winter. Drawing the church presented decisions about composition and how to align the Manor House and the orchard, I thought the pathway might give a sense of direction or focus too. Landscapes with a church seem to demand less focus on the church than with churches in their own space and this I suppose relates to distances. 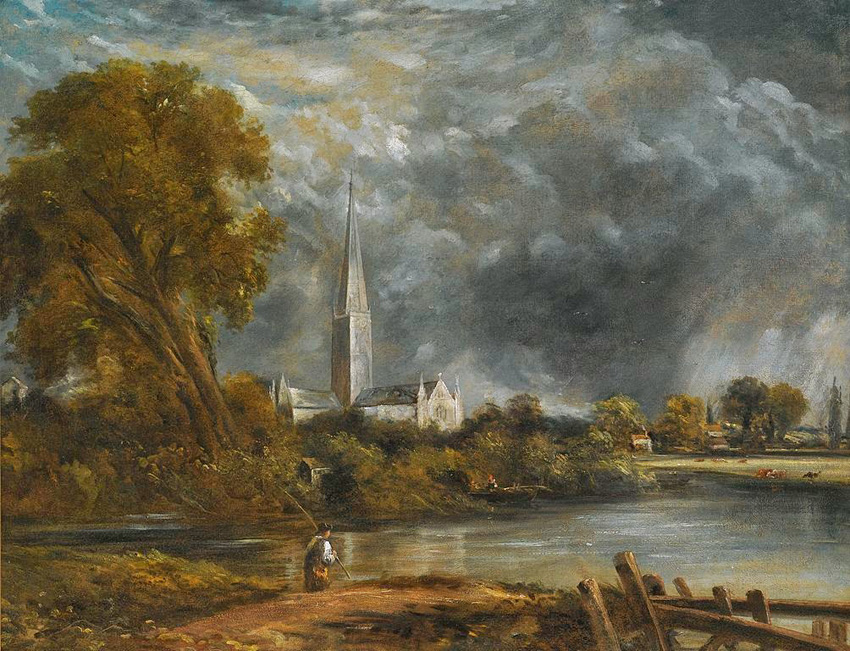 Constable uses the light to give the cathedral its imposing look against a stormy, influential sky. The cathedral does not take centre stage in the composition which allows Constable to place this beautiful, old building in a context, the landscape. It seems, therefore that it is the sky in the landscape that is such a compositional influence. 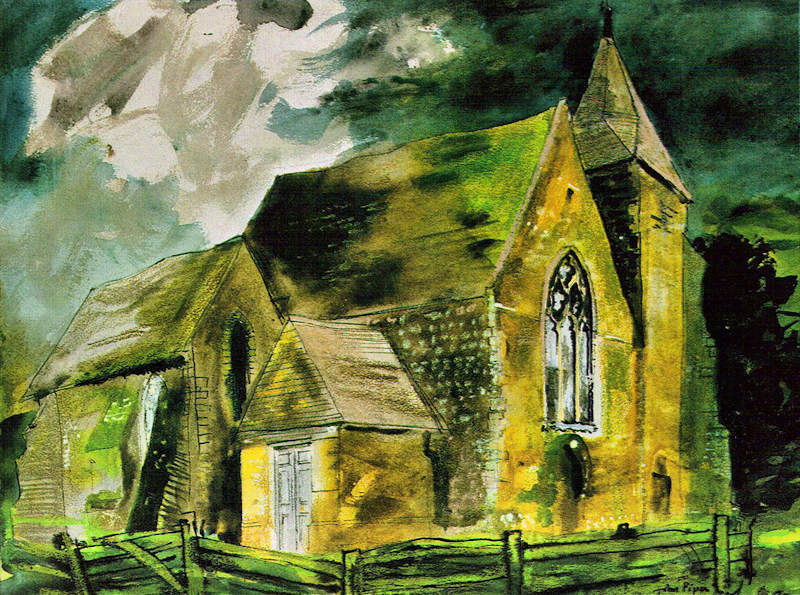 In contrast to Constable’s composition, John Piper is focused on the church and, similar to Ted Battersea, gives the sky a strong compositional influence to the lasting effect or impression of the church. We know where the light is striking Piper’s St. Clement Church. He uses a wide range of tonal values to portray the features of this lovely old building and he uses what can be described as a limited palette as well as ink and wax. In Constable’s painting of Stonehenge, the sky has a major compositional effect on the stones and a rolling vast landscape. 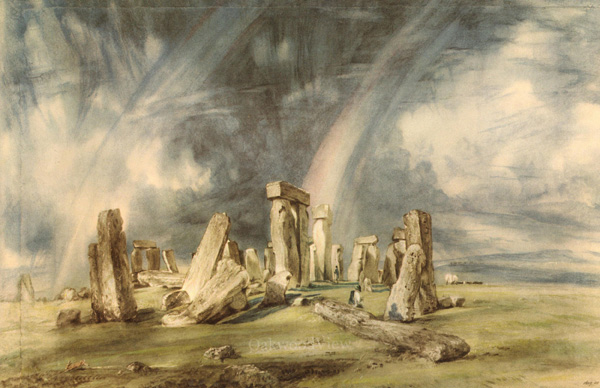 In Constable’s painting of Stonehenge, the sky has a major compositional effect on the stones and a rolling vast landscape. 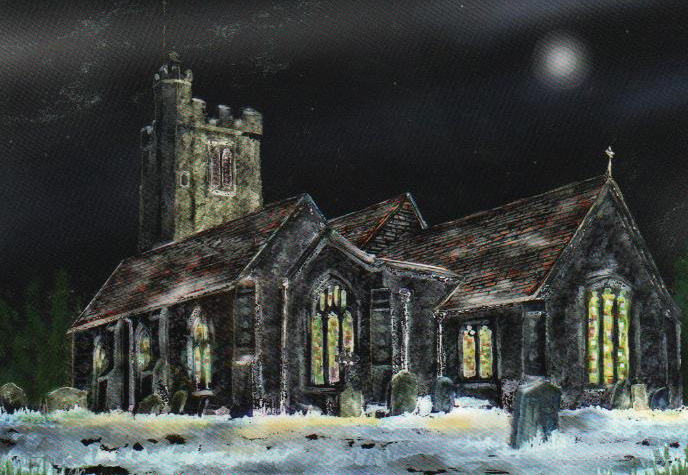 This painting by Alan Taylor is an interesting piece of work and, for several years, it has been a very popular image on Church Greeting Cards and in the Hernhill Artists Calendar of 2010. Alan recollects that the work commenced with a black watercolour wash, followed by the use of acrylics for the church and snow then the use of inks for highlighting the stars and snow on the building. The moon is an important influence on the composition. Initially, the moon was inserted with acrylic and then gradually the moonlight, reflected from the snow in particular, as a tonal value spread over the image before the ink was applied, a very tricky operation.