Information about services at the church can be found on the Benefice website – www.boughton-hernhill-graveney-churches.com 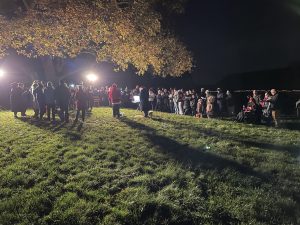 Carols On The Green December 2022 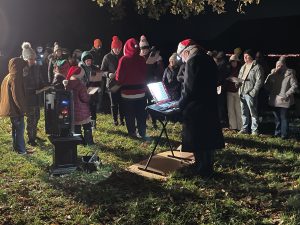 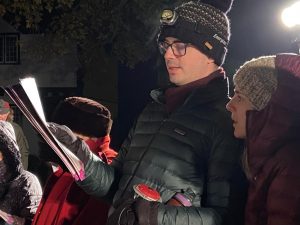 Pictured on the right are John and Naomi Colmer visiting with their two children from Virgina, America.  Naomi grew up in Hernhill and she and John were married in St. Michael’s.

The visit of Rose, Bishop of Dover on Sunday, February 6th was a delightful and memorable 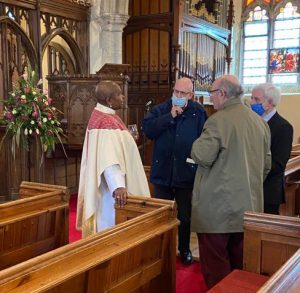 occasion. The Communion Service was well attended by many from each of the Benefice churches, Hernhill, Boughton and Graveney. During her delightful, humorous and informative sermon, Bishop Rose reminded the congregation of her four major objectives on taking up her new role which she intended to encourage all comers to heed and pursue; Prayer, Bible Reading, Generosity, and Evangelism.

2020 was to be the year when we celebrated the 900th anniversary of the consecration of Hernhill Church and its original dedication to St. Stephen. Like so many other celebrations, Covid delayed this event initially by a year and then by two. It is now planned to celebrate in 2022 with a series of events centred around the church and giving the local community an opportunity to enjoy this beautiful building. Details of these events will be posted here as soon as they are finalised.

Alan Taylor’s book on the history of St. Michael’s Church can now be purchased at the church, price £5. It gives a detailed history of the church from its foundation in 1120 through to its 900th anniversary in 2020.  The church’s architecture is discussed with colour layouts to explain how it has changed over time.  A review of the stained glass and memorials is illustrated with numerous colour photographs.   Also included are brief histories of the village and its school.

On 4th December 2021 a service was held in front of the war memorial at St. Michael’s Church to mark the 100th anniversary of its unveiling and dedication. As part of the service, a brief biography of each of the thirty men from Hernhill Parish who lost their lives in the First World War was read out.

At the service part of the address given at the dedication by the Archdeacon of Canterbury was read out. He had spoken of the ‘indelible debt of gratitude, honour and sympathy’ owed to those who had given their lives for their country and asked for remembrance for the many who had survived the war but at great personal cost to themselves and who were in difficulties of all sorts.

The unveiling of the memorial in 1921 had been performed by Brigadier-General Pitt and his address at the time was also read out.

The men who had died while serving during the First World War included six sets of brothers.

James and John Clinch were the sons of Mr Clinch who farmed at Wey Street. It was reported that he was so upset by their deaths that he could no longer bear to walk the fields where his sons had grown up and retired from farming.

John and Frederick Brown’ parents lived at Miles Cottage, Dargate. Frederick died on the last day of the Battle of the Somme in November 1916, as did Percy Arnold who also came from Hernhill.

George and John Pout, whose parents lived at Pleasant View Dargate, died within three weeks of each other in June 1918.

Percy and Sidney Smith lived at Dale Farm, Church Hill before they enlisted. Sidney Smith had been awarded the Distinguished Conduct medal for carrying wounded men off the battlefield when heavy fire prevented stretcher bearers going to their assistance. He died in November 1917 and his brother died in November the following year.

George and John Twrell’s parents lived at Sandhole in Kemsdale Road. John had died in 1916, but George was killed in the last weeks of the war in November 1918.

Alec and Victor Wraight, who lived at St. Michael’s Cottages, died in March and August 1918. Their brother Sidney also served and survived the war but lost a leg in action in 1917.

Two men, William Harvey and Charles Arnold, served on the same ship, HMS Aboukir. They both lost their lives when their ship was torpedoed off the Dutch coast in September 1914.

Further information on all those whose names appear on the war memorial can be found at http://www.boughton-dunkirk-hernhill-warmemorials.com.