Posted by Grant on 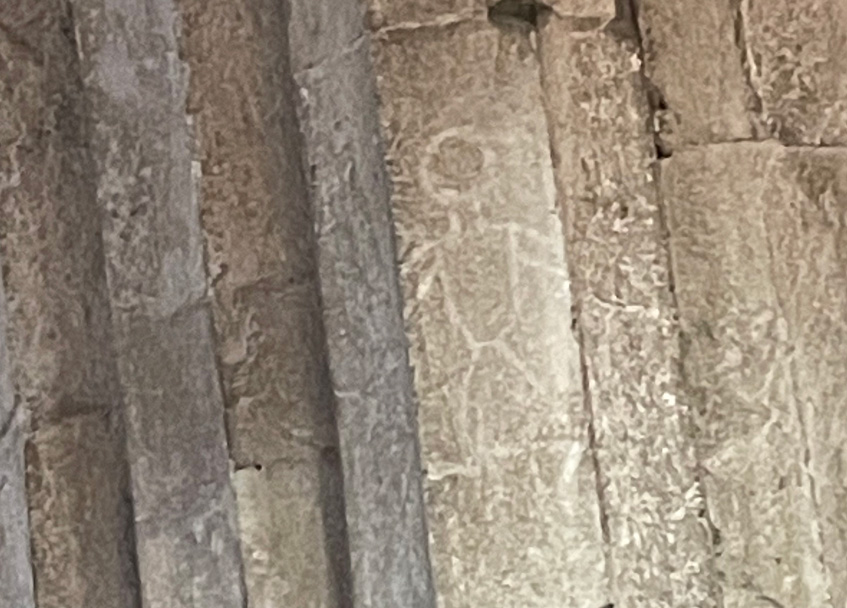 If today you were found doodling on a wall of St. Michael’s Church, you would receive a firm, but polite, reprimand from the Churchwarden. But that was not always the case. In the medieval period drawing or etching on church walls was not only tolerated but encouraged. To understand why that was so, we need to consider the role religion played in medieval life and how parishioners viewed their local church.

When St. Michael’s was rebuilt in the 14th century, England was a Roman Catholic country following religious practices and beliefs that had developed over many centuries. Fundamental to these was the belief that heaven was actively and intimately involved in peoples’ everyday lives and willing to intervene to help with the difficulties that everyone faces from time to time. Sometimes these interventions were through the agency of angels or saints, but often they just happened. In a world where so much occurred for no apparent reason and where there was little prospect of worldly help with disease, crop failure and other life-changing events, the hope of heavenly intervention was a powerful influence. This can be seen by the popularity of pilgrimage which, although sometimes undertaken as a penance, was often to seek heaven’s help at the shrine of a famous saint or other religious place.

To the modern mind it may seem odd to think that a journey to a shrine was necessary given that the saint was usually dead. The medieval belief was that certain items and places had a particular spiritual value and as such formed a strong link between earth and heaven. Such links were made by saint’s bones, holy relics and places where miracles had been reported. They were also made at other spiritual places such as churches. A prayer offered where such a strong link existed had a better chance of being heard in heaven than one offered elsewhere.

These spiritual places were not like medieval telephone boxes. At the end of a visit to a place where a link existed, the ‘connection’ with heaven could be maintained by taking something of that place away. An example is the pilgrim’s token which extended the link with it when brought home. Such tokens were often brought back to a parish church where they were available for use by other parishioners in time of need.

The ‘connection’ could also be maintained by leaving something personal at that spiritual place. Which is one reason why drawings or etchings (properly called’ graffiti’) on church walls were accepted in the medieval period. A good example of such graffiti can be found at Blakeney Parish Church on the north Norfolk coast. The interior of this church has over thirty images of ships that were etched on it in the medieval period. Some of these etchings are sufficiently detailed and well preserved that it is possible to identify the type of ship depicted and they offer a unique insight into how ship design developed over time. They range from early single masted vessels to Tudor galleons and it’s clear that whoever etched the later ships took care not to overlay the images of earlier vessels. The etchings are grouped within the church close to where an altar dedicated to St Nicholas had been. Now better associated with Christmas, in the medieval period St. Nicholas was the patron saint of those in peril on the sea. The etchings are believed, therefore, to have been made to establish a spiritual link between St Nicholas and the ships depicted in the hope that the ships and their crew would have the saint’s protection while at sea.

After the Reformation church beliefs changed, as did ecclesiastical tastes in interior design, with earlier brightly painted walls being whitewashed or scrubbed clean. These changes have meant that much graffiti in parish churches have been lost. St Michael’s Church was a relatively modern church at the time of the Reformation so it is unlikely it would have had much graffiti. However, one notable example exists and is shown in the picture below.

This etching is high up on the arch at the west end of the nave where the minstrel’s gallery once was. The gallery was installed at the end of the 18th century which suggests that the etching is relatively modern; possible done by a bored musician during a lengthy sermon? The etching would have taken some time to compete and is clearly visible from the front of the nave, which makes it tempting to think it must have been a very long sermon given by a vicar with failing eyesight. The figure seems to be dressed in a simple tunic tied at the waist. A style of dress more common in the medieval period than the Georgian. But like much church graffiti, there is not enough evidence to know with any certainty why or when it was created.

Not all etchings in medieval parish churches were personal marks. Churchwarden’s chests (where important documents and valuable items were kept) were often doubly protected. Stout locks and iron bands were reinforced by marks to ward off evil forces. Such marks took the form of complex interlinking circles and were believed to work by trapping evil spirits in them. Rather like a maze for the spirit world.

Church porches frequently display merchant’s marks. When both parties were illiterate, it was common to make agreements between them binding by reciting the terms of the agreement in the porch of the local parish church and then scratching a mark on the wall of the porch to record the event. This was considered an effective way of binding the parties to their promises because heaven had heard what was agreed. Anyone who broke a promise witnessed by heaven faced severe sanction, if not in this life, then the next.